How Well Are Masks Working World-wide?

Historical scientific studies do not make a compelling case that universal masking would meaningfully help, so let’s explore real-world situations to see where data leads us.
Austria was one of the first governments to require masks, and it did so about 10 days after its cases began to go down. The level of downtrend did not change or improve after masks were required. After the nation’s people wearing masks for an extended period, cases are currently four times where they were when Austria mandated masks, and cases continue to climb. 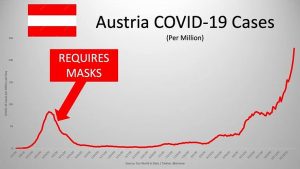 Germany mandated masks about halfway down its original recovery. Their cases are now similarly climbing quickly. 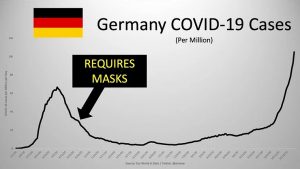 The French now have around 1,000 percent more daily cases they had when they mandated masks, despite having one of the highest mask compliance levels in the world. 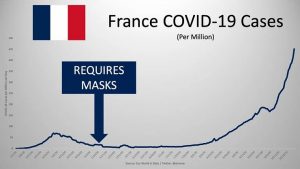 Spain was not far behind its French neighbor with a mandate. Spain required masks when cases were near zero and has the highest compliance with mask-wearing in all Europe. Now Spain is at around 1,500 percent the level of cases compared to when it mandated masks.

After three months of requiring masks, the United Kingdom is at around 1,500 percent more cases despite having one of the highest mask compliance records in Europe.

Italy had extremely high levels of mask-wearing despite no national mandate. Recently skyrocketing cases finally compelled them to create one of the strictest mask laws in the world, but the results have predictably failed to slow the rise in coronavirus cases. In fact, cases skyrocketed immediately after the mask mandate went into effect.

Similar results have been found in Ireland, Portugal, Israel, and many other countries. No matter how strictly mask laws are enforced nor the level of mask compliance the population follows, cases all fall and rise around the same time.

How about the United States? Americans have proven to be highly compliant with mask wearing, even higher than the Germans.

It is therefore no surprise that the same trends found in Europe are also found in U.S. states. For example, California required masks in June but cases still went up by more than 300 percent and the state remains heavily locked down four months later with still higher cases.

Hawaii suffered one of the most economically devastating lockdowns of all the U.S. states. It was also an early mover on mandating masks both indoors and outdoors, but cases still went up by almost 1,000 percent.

With and without mask mandates, Texas and Georgia followed nearly identical case development.

For those more interested in comparing deaths than cases, we again don’t see a pattern of masks meaningfully helping.

Why don’t masks work on the general public? For one, if you read the fine print on most consumer masks you will see something along the line of “not intended for medical purposes and has not been tested to reduce the transmission of disease.” Masks can work well when they’re fully sealed, properly fitted, changed often, and have a filter designed for virus-sized particles. This represents none of the common masks available on the consumer market, making universal masking much more of a confidence trick than a medical solution.

If we actually wanted effective masks, then manufacturers should be conducting scientific tests evaluating masks specifically for their ability to reduce the spread of coronavirus. The Food and Drug Administration and CDC should be making recommendations on which masks to use and approving masks based on their scientific efficacy rather than promoting the wrapping of any piece of miscellaneous cloth around your face.

Many powerful institutions have too much political capital invested in the mask narrative at this point, so the dogma is perpetuated.

Effective masks, if they exist, should then be distributed to highly vulnerable groups for use only in rare and extenuating circumstances. There would be little point for the population at large to wear masks all the time because while focused protection may be possible, it is not possible to eradicate the virus at this point or stop its spread.

Our universal use of unscientific face coverings is therefore closer to medieval superstition than it is to science, but many powerful institutions have too much political capital invested in the mask narrative at this point, so the dogma is perpetuated. The narrative says that if cases go down it’s because masks succeeded. It says that if cases go up it’s because masks succeeded in preventing more cases. The narrative simply assumes rather than proves that masks work, despite overwhelming scientific evidence to the contrary.

The narrative further ignores places like Sweden and Georgia, which never required masks in the first place, and it suppresses new scientific evidence if it doesn’t support desired political results, such as data from the world’s only randomized trial investigating if masks actually protect from COVID-19. Even a Nobel laureate has been canceled because his COVID charts and data were found to be undesirable.
History does not bode well for times that politics meddles with science. Martin Kulldorff, a professor at Harvard Medical School and a leader in disease surveillance methods and infectious disease outbreaks, describes the current COVID scientific environment this way: “After 300 years, the Age of Enlightenment has ended.”

In the end, it will be the loss of credibility in our scientific institutions, and the unnecessary division they have sowed among us, for which masks will be remembered.

Yinon Weiss is a tech entrepreneur, a U.S. military veteran, and holds a degree in bioengineering from U.C. Berkeley. Follow him on Twitter.